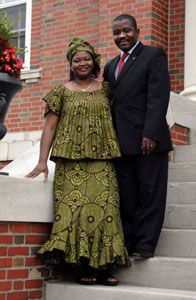 Macklann Basse graduated from Covenant Seminary with an MATS in 2006, and was ordained at New City Fellowship St. Louis (PCA) in partnership with the Evangelical Togolese Presbyterian Church (EEPT). In 2010, Macklann and Rose returned to their home country after spending almost eight years in the United States. They returned to Lomé as missionaries with Presbytery Mission International to start Africa Missions with Nations, a mission organization that would train future missionaries to plant churches and disciple Africans to care for the least among them.

Rose serves as Principal of the "New Beginnings School" that continues to grow each year. Daycare is provided for children from six months and children elementary school are shown the love of God in a strong educational context. Through AMN's Missionary Training Institute, Macklann is meeting weekly with students in three different locations and is teaching them to be missionaries in their city and villages. One student came from Niger for extensive training with Macklann. Upon returning home, he has planted 15 rural churches throughout the countryside in Niger. Each August, AMN hosts a missions conference that encourages people to receive God's grace in Christ, share the Gospel in their particular context, and practice justice for those who are oppressed or lowly. The Missionary Training Institute holds student graduation every two years. The fields are ripe unto harvest, but the workers are few. Pray for more workers for the harvest!

The work has kept Macklann and Rose busy as they share the Gospel of God's grace, disciple His sheep and care for the least. Macklann purposefully confronts the legalism and "prosperity Gospel" that is so prevalent in the culture with the grace of God and the call to lay down your life and follow Jesus. The Basses also work with Mama Theresa, a close friend who runs an orphanage. Despite humble circumstances, the Basses remain steadfast in God's work in Togo, because they know He remains steadfast in His commitment to them and to the lowly. Macklann cites Psalm 68:5 as a constant encouragement: "Father of the fatherless and protector of widows is God in his holy habitation." (ESV) Macklann and Rose need your partnership and long for more U.S. churches to join them in caring for the lowly in Togo.

All newsletters are archived in Adobe PDF format.